Brody Neuenschwander was born in Houston, Texas in 1958. He attended Princeton University, where he was appointed University Scholar, graduating in 1981 with high honors for his thesis on the techniques of medieval manuscript illumination. Neuenschwander completed his doctorate on the methodology of German art history in 1986 at the Courtauld Institute in London. At the same time he studied calligraphy at the Roehampton Institute. The cross-fertilization that resulted from doing academic and practical studies simultaneously has influenced all his subsequent work. The objects studied by art historians are, for Neuenschwander, things that were made by human hands. The structure of the atelier and the properties of the materials are as important to him as the social context of their creation.

Neuenschwander began his professional career as assistant to Donald Jackson, an English calligrapher living on the Welsh borders. For a year Neuenschwander did studio work, mostly traditional ceremonial pieces. In 1989 Neuenschwander met the English film director Peter Greenaway, who asked him to provide live-action calligraphy for the film “Prospero’s Books”. Greenaway asked pertinent and challenging questions: “Can calligraphy be charged with emotions and historical associations? Can it represent in visual terms sound patterns of the language? Can it explore the tense region between text and image?”

In subsequent collaborations (“The Pillow Book,” “Flying over Water,” “Bologna Towers 2000,″ “Columbus,” “Writing to Vermeer” and so on) the implications of these questions for contemporary calligraphy would be investigated. In 1990 Neuenschwander met the German theoretician Hans-Joachim Burgert, whose analysis of the visual properties of calligraphy is essentially a classic German Gestaltungstheorie. Letterforms are subjected to formal analysis and judgment. Burgert replaces traditional Western standards of precision and regularity by a new formal language, one that is much closer to the esthetic judgments inherent in Arabic and Chinese calligraphy. Neuenschwander subsequently translated many of Burgert’s writings into English, which naturally allowed him to form a deeper understanding of Burgert’s theory and has led to this theory being studied and adopted by other calligraphers in the West.

For Neuenschwander this new theory was a revolution. Suddenly the calligraphy of the East, which had always exerted an enormous attraction, could be analyzed and understood, not linguistically, but visually. The image-nature of these writing systems could surface. Arabic and Chinese calligraphy have influenced his work ever since.

In 1989 Neuenschwander met Nadine Le Bacq, who would become his wife in 1991. They moved to her home town Bruges in 1993, where they now live with their daughter Clara.

In 2004 Neuenschwander spent a semester teaching text art at the School of the Museum of Fine Arts in Boston. This sabbatical from the artist’s studio allowed him to do research into the origins of text art in the first quarter of the 20th century and to follow this development as it impacted art after the second World War. Text artists such as Cy Twombly, Jessica Diamond, Bruce Nauman and Barbara Kruger have defined a new category of art which places visual language at the center of their artistic experiments.

In recent years Neuenschwander has continued his studies of non-Latin scripts. In the project called “A Brush with Silence” he brings together calligraphers from the world’s many writing traditions for a silent calligraphic happening. Writers of Arabic, Chinese, Tibetan, Japanese, Hebrew, Greek, Cyrillic, Devanagari, Runes, codes and graffiti join forces with writers of English, German, French, Italian and Dutch to create a meditation in ink. The happening has now happened in eight countries, always to great crowds of silently enthusiastic visitors. “A Brush with Silence” is a perfect symbol of how humanity can live together in peaceful and beautiful tolerance.

In September 2020 a television series on the origins and future of the world’s great calligraphic traditions, ten years in the making, was aired on the BBC, Arte and Nova. This three-part series, directed by David Sington, produced by Hugh Sington and written by David and Brody, traces the origins of writing in the remote past of Egypt and Sumer, China and Meso-America. The origins of the alphabet in the mountains of Sinai are shown in dramatic desert scenes. The spread of this alphabet to all corners of the world via Phoenician traders, the Romans and the traders of the Silk Road makes for riveting viewing. The rise of Islam brought spectacular calligraphy in its wake, and spread the use of paper from China to the Pillars of Hercules.

Materiality and its effects on communication history is a central theme. The limits imposed by parchment on the spread of knowledge in medieval Europe is contrasted with the free flow of information engendered by the availability of cheap and plentiful paper. In China this is especially marked, as block printing on mulberry bark paper put books into the hands of a large segment of the society.

The final episode looks at script and politics, script as identity in the modern era. The Latin alphabet very nearly swept all before it, with even the Chinese considering the possibility of abandoning their ancient script. This disaster was narrowly averted, but a new one looms: the digital age. How will the world’s ancient and honorable non-Latin scripts respond to this new, global threat? If you missed the series, you will have to wait for it to appear on Netflix to find the answer. 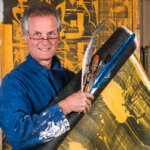 by Brody Neuenschwander
In Live
€200,00
Add to cart

by Brody Neuenschwander
In Closed
Closed!

OCTOBER 2021 — Wrong Letters: Fat and Juicy with a Pointed Brush

DECEMBER 2021 — Wrong Letters: The Comb Pen and the Brody Pen